A speech-to-text software application with accuracy of up to 93.6 percent was honoured on November 15 as the winner of the Vietnamese Talent Awards 2019 IT category. 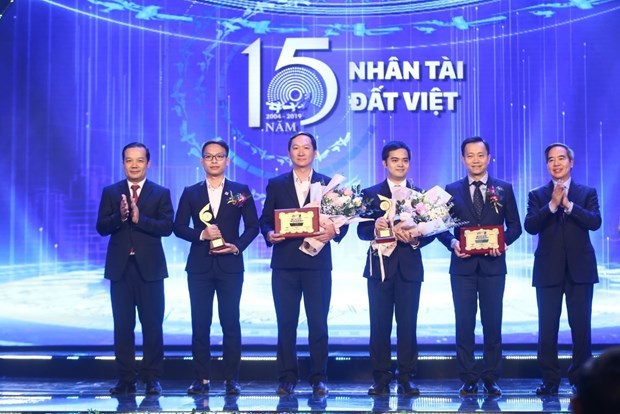 Some of the winners of the Vietnamese Talent Awards 2019

Origin-STT is able to recognise different Vietnamese accents and about 7,000 Vietnamese words so that users no longer have to listen to audio files and type the text.

The second prize went to a security solution for surveillance cameras designed by the Institute of Information Technology and Communications at the Hanoi University of Science and Technology, and GoStudio designed by GoStream in the field of TV broadcasting.

The winner of the science and technology category was an invention to upgrade armoured combat vehicle to act as ambulances for peacekeeping missions designed by Dr Tran Huu Ly from the Military Institute of Mechanical Engineering, Ministry of National Defence.

Professor Dang Kim Chi, chairwoman of the Scientific Council at the Vietnam Association for Conservation of Nature and Environment won the environment category for her research into the environment in traditional handicraft villages.

Themed “The Power of Digital Transformation”, the Vietnamese Talent Awards 2019, the biggest annual IT awards, celebrated its 15th anniversary this year.

It welcomed 418 entries, an increase of 30 percent from last year.

The number of products this year was the highest since the awards were launched in 2004. Some products were sent from Germany, Canada, the US and Switzerland, according to the organisers.

Over the past 15 years, the awards have been expanded and attracted the participation of local and foreign IT engineers.

In the final round, 19 products featuring technologies in digital information, IT and start-ups made the cut.

For the first time this year, the innovative start-up category was included. The competition also accepted incomplete products from those who wished to develop their ideas and seek markets, offering chances for start-ups which were unable to finalise their products.