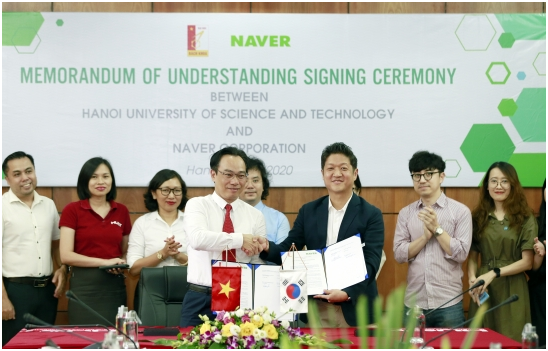 Hoang Minh-son (left in the front row), president of the Hanoi University of Science and Technology (HUST) shakes hands with Park Dong-jin,

head of Naver Vietnam at a MOU signing ceremony between Naver and HUST.

Naver announced on July 16 that it will operate an industry-academic cooperation program with the Hanoi University of Science and Technology (HUST) to foster IT talent.

Founded in 1956, HUST is Vietnam's most prestigious university which has made outstanding achievements in science and engineering. The university has about 34,300 students including 1,700 masters and PhD candidates.

Naver declared the establishment of a "global AI research belt" at the DEVEIW 2019, a developers contest. The belt encompasses research centers in Korea, Japan, France and Vietnam. The centers include Naver Labs Europe, one of the world's top four AI research institutes in France, which was acquired by Naver. In November 2019, Naver held a workshop on robots and AI with 11 scholars in the AI and robot fields in this lab to announce the start of the belt.