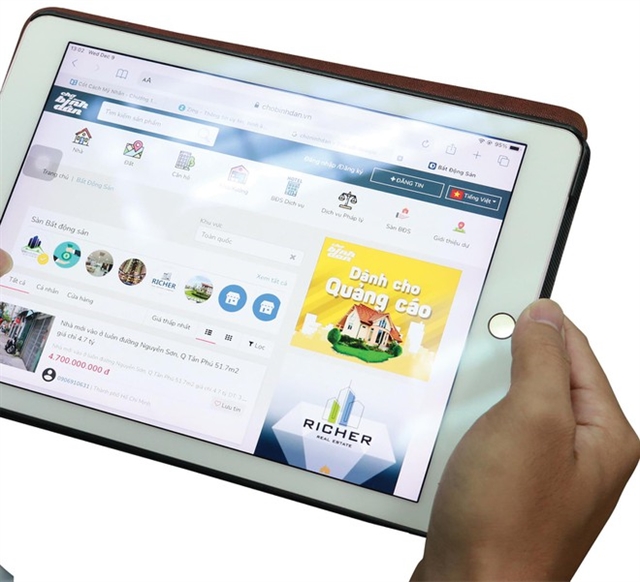 HÀ NỘI — Vietnamese property technology (proptech) firms are attracting the attention of both foreign and domestic investors keen to grab a larger share of the country’s US$500-million market.

It is estimated that Viet Nam has about 100 proptech companies, 80 per cent of which are foreign-owned or receive foreign funding.

The travel tech start-up has raised a total of $6.1 million in investment over the last year. It closed a Series A funding round of $2.5 million, led by STIC Ventures, KB Investment, Wonik Investment Partners and Wadiz Platform, in February 2020, and received $2.3 million in a Series A+ funding round led by HB Investment and Platform Partners Asset Management just a few months ago.

Another Vietnamese proptech start-up, Citics, bagged $1 million in a pre-Series A round from international and domestic investors in March. Investors included Singapore’s Vulpes Investment Management and the RoK’s Nextrans and The Ventures. It had earlier raised $700,000 from angel investors.

In March, Việt Nam’s Homebase said it had mobilised $125,000 from the US-based accelerator Y Combinator (YC). Last December, it secured an undisclosed sum in a pre-Series A funding round led by VinaCapital, US venture capital company Pegasus, and Singapore’s 1982 Ventures.

A property market worth around $21 billion coupled with a young tech-savvy population are setting the scene for proptech businesses to boom in Việt Nam.

The country’s real estate market remains in the early stages of development, with many problems to solve, according to Neil MacGregor, Managing Director of Savills Vietnam. Proptech is able to provide solutions to tackle these problems.

Many Vietnamese are tech-savvy and capable of picking up new technologies quickly, and proptech firms are targeting these people, particularly condo owners and users of real estate apps, he added.

Vice Chairman of Cen Land Phạm Thanh Hưng said proptech is an emerging market in Việt Nam, grabbing major attention from investors and start-ups. Many platforms recording initial success, however, have been acquired by foreign investors, he noted, adding that it is important to develop a “Make in Vietnam” platform in real estate. — VNS