The central city and IT giant FPT Group have inked a Memorandum of Understanding (MoU) on digital transforming in 2021-25, accelerating the ‘smart city’ project in 2030. 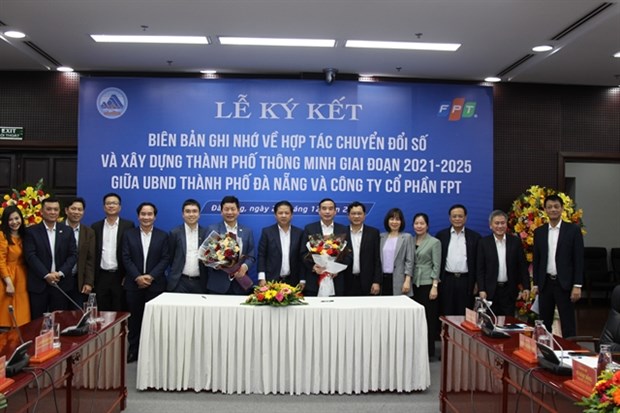 Da Nang and FPT agree to boost digital transformation in the city in 2021-25. (Photo courtesy of FPT Group)

The MoU, signed on December 28, was developed from the cooperation deal between FPT and Da Nang in 2018-20 in boosting the digitalisation process and putting the city on the list of ASEAN smart city network in 2030.

Chairman of the city’s people’s committee, Le Trung Chinh said the MoU was part of the positive cooperation in the IT industry – one of four key roles of the city’s strategic socio-economic development plan in 2030.

He said the new deal would help speed up the digital transformation process in the city and build Da Nang into an eco-urban and a ‘liveable and smart’ city in the coming years.

The 2021-25 MoU will focus on the smart city framework in traffic, education, natural resources and environment, health, agriculture, trade and industry and information and communications.

FPT will begin the digitalisation among business and administration in tourism hub Ngu Hanh Son district before expanding to the other six districts in 2021-25.

The IT group had launched a management system at 12 hospitals in the city in providing service for 3 million patients per year.

FPT said it had enrolled 5,000 students for training at its own education system, including a secondary school, high school and university.

Chairman of FPT Group, Truong Gia Binh, said the group, which has invested 2.5 trillion VND (108 million USD) in Da nang, earned revenue of 5 trillion VND in 2021 – making up a 30 percent share in the city’s information and communications industry revenue.

FPT also helped Da Nang in the development of the 10,000-Bridge Software Engineer programme in boosting the Japan market, and built up an IT service centre and urban, the FTP City Complex.

Earlier, Da Nang and Viettel signed an MoU on the ‘smart city' project in 2021-25, launching a 5G network at Da Nang Software Park No 1 and No 2, with an Internet of Things service, a digital database centre and cybersecurity services./.