The trade fair, held in offline and online formats, is expected to enhance trade linkage between domestic and foreign businesses.

The opening ceremony of Vietnam International Trade Fair (Vietnam Expo 2022) themed “Step together in digitized world” was held on April 13 in Hanoi. The event will run until April 16. The 31st Vietnam Expo 2022 drew the participation of more than 400 Vietnamese and international businesses from 15 countries and territories. With a scale of 380 booths, the fair is divided into four key areas: international pavilion, Vietnam value and export, machinery and supporting industries, digital technology and e-commerce.

Addressing the ceremony, Nguyen Hong Dien, Minister of Industry and Trade, said the international trade fair, which is held annually in Hanoi, has become one of the important promotion activities and the largest-scale event of the trade and industry sector.

“It is expected to bring economic values and opportunities for Vietnamese businesses to improve domestic and export markets, as well as their capacity to participate in the global value chain, and actively contribute to the implementation of the Government's commitment to international economic integration,” he underlined.

Vu The Tung, the Director of Business Development and Government Relations at Alibaba, emphasized that trade promotion activities through exhibitions play an important role in fostering economic development.

During the process of economic recovery in the new context, the business community will look forward to attending more offline and online exhibitions to find partners and clients. As the year 2022 marks the 30th anniversary of the establishment of diplomatic relations between South Korea and Vietnam, the Northeast Asian country is the honorary country of the event. The South Korean national pavilion gathered more than 70 prestigious enterprises.

“We hope that through Vietnam Expo 2022, businesses of the two countries will have more opportunities for new and deeper cooperation,” he said. 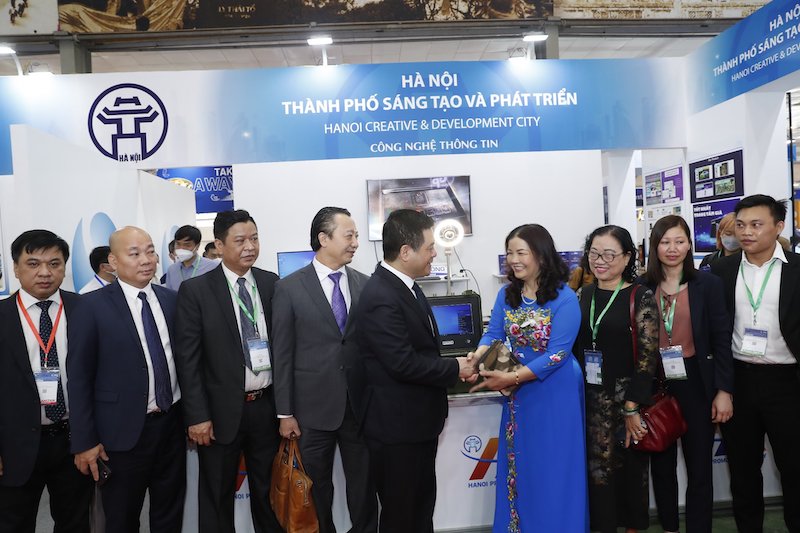 Trinh Thi Ngan from the Hanoi Small and Medium Enterprises Association (Hanoisme) said this is an opportunity for trade exchange to stimulate export and domestic consumption for the city’s businesses.

At the fair, the company displays products of 100% natural origin produced in its factory in Khanh Hoa Province.

In addition, a series of promotional activities introducing potentials and investment policies of Hanoi will take place during the fair.