Da Nang is drafting a plan on digital transformation which is viewed as momentum for the central city to address bottlenecks in development and complete its smart city building by 2030. 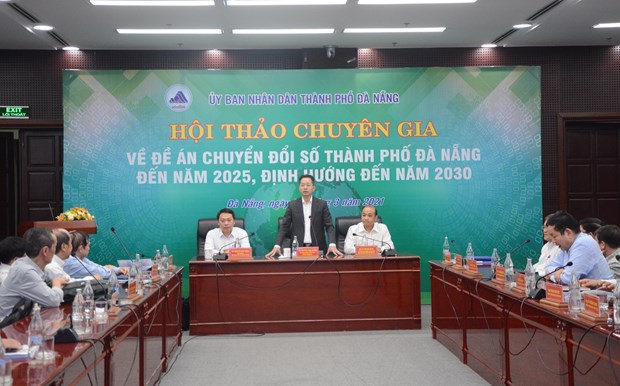 Experts gathering at a workshop on March 22 recommended Da Nang to focus its digital transformation plan until 2025, with a vision to 2030, on digital economy, digital society, and digital administration.

It should develop a digital foundation, digital data, digital infrastructure, digital personnel, and cyber safety and security, which are considered driving forces of digital transformation, they said.

Secretary of the municipal Party Committee Nguyen Van Quang said the national digital transformation programme, issued under the Prime Minister’s Decision No. 749/QD-TTg on June 3, 2020, is key to implementing the Politburo’s Resolution No. 52-NQ/TW on some guidelines and policies for proactive participation in the fourth Industrial Revolution.

Quang noted that digital transformation is momentum for removing bottlenecks that have hampered the city’s development over the last years and helping to achieve the goal that by 2030, Da Nang will complete its smart city building and be uniformly connected with the smart cities networks of Vietnam and ASEAN.

It will also support Da Nang to become an ecological, modern, and worth-living city as targeted by the 12th-tenure Politburo in Resolution No. 43-NQ/TW on the development of Da Nang until 2030, with a vision to 2045, he added.

Vice Chairman of the municipal People’s Committee Le Quang Nam said Da Nang identifies its people and businesses as the centre of digital transformation, adding that to reap successes, it is necessary to have right, clear, and feasible strategies, visions, targets, tasks, and solutions, as well as resolutions and plans reflecting municipal leaders’ political resolve.